However, in Nasdaq Helsinki large cap companies, the use of sustainability-related metrics in LTI plans has increased, and this year approximately 40 per cent of companies use an ESG criterion, compared with approximately 25 per cent last year.

Several companies that participated in the survey are currently following some sustainability-related targets, but these targets have not been linked to remuneration so far. Some respondents feel that measuring sustainability and deriving metrics from strategy is challenging and therefore ESG metrics have not yet been taken as a criterion for remuneration.

When planning the introduction of sustainability-related metrics, it is important to identify appropriate metrics for each company which may be contributed by those who belong to the target group of the incentive plan.

Based on our experiences, a successful sustainability metric measures objectively, and it is comparative, sufficiently comprehensive and transparent. Metrics must be able to be audited and compared with other companies and industries in a neutral way. Metrics should be linked to the strategy and be defined so that they can be compared using methods such as third-party validated methods. 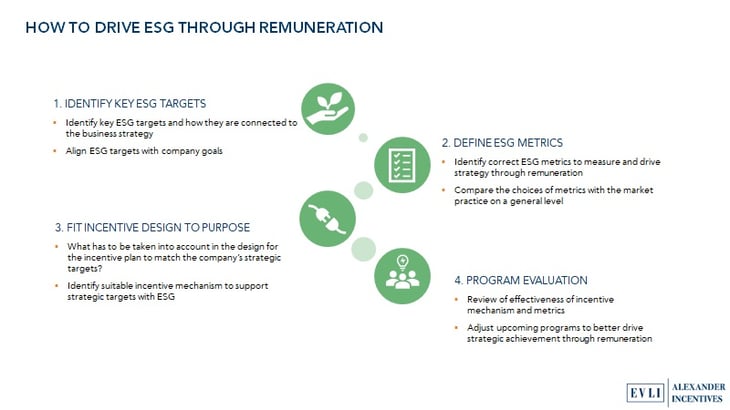 In LTI plans, environmental and social responsibility metrics are most commonly used, and typical metrics include e.g., reduction of CO2 emissions, carbon neutrality and safety at work.

Responsibility also means that the company supports the financial future of all employees. More than 40 per cent of large cap companies have a personnel fund in place, and employee share savings plans are directed to all employees, which serve flexibly as a supplementary to the statutory pension system. The personnel fund is also considered as more flexible than supplementary pension schemes complementing the pension system.

In addition to the shareholders, a growing number of institutional investors are systematically reviewing corporate ESG data, and the investment decision is influenced by the reporting of risks arising from climate change, for example. Proxy advisors are also paying increasing attention to setting and achieving ESG targets.