Evli has started cooperation with the John Nurminen Foundation. The Foundation is not only an award-winning provider of knowledge and maritime content, but also a water conservationist with a focus on impact. For Evli, protecting the Baltic Sea is a natural step on the way to becoming a carbon neutral asset manager.

Between 2005 and 2020, the Foundation has launched almost 40 Clean Baltic Sea projects, of which 30 have been finalized. With the help of its partners, the Foundation has been able to significantly reduce the nutrient load in the Baltic Sea, including reducing the risk of oil spills. Ongoing projects include research into the benefits of mowing coastal reeds and spreading information on gypsum treatment of fields as an effective water protection measure.

"The Baltic Sea has always been close to Evli's heart, which is why we find it very meaningful that we can be involved in helping the Foundation in its impressive conservation work," says Maunu Lehtimäki, CEO of Evli.

"Environmental responsibility is highlighted in our operations in many ways; sustainability is one of Evli's strategic focus areas and is integrated into our investment operations," Lehtimäki continues. "We have set the goal of halving carbon emissions from our investments by 2030 and carbon neutrality by 2050 at the latest. Cooperation with the John Nurminen Foundation is a great way to make a real impact on the well-being of the Baltic Sea, and we are happy to be involved in supporting a worthy cause."

"In our projects to protect the Baltic Sea, we continue to focus on the biggest problem: eutrophication. We are grateful that Evli has chosen to donate funds to activities that can slow down or stop eutrophication. Thanks to Evli, we are one step closer to our goal: a Baltic Sea on our horizon with clear water, not too many nutrients and algae, and enough oxygen at the sea floor," says Annamari Arrakoski-Engardt, PhD, CEO of the John Nurminen Foundation. 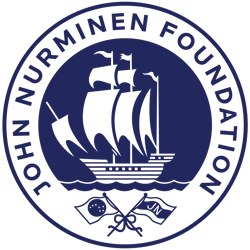