No asset class was safe from the effects of the Covid-19 crisis. You’re probably wondering, “What about the bonds that mature next year?” Nope, not even them. While an equity investor barely breaks a sweat at a drop of -10% in a crisis, the March return of -2% in the very short-dated credit market was more of a shocking abnormality.

Fortunately, this opens up a once-in-a-decade opportunity in which very short-dated bonds now offer similar attractive yields to their riskier, longer-dated peers.

What’s the next catalyst? The ‘pull to par’: remember, corporate bonds have a maturity date when they’re paid back in full. For ultra-short-dated bonds, this means a price return to 100 (par) in the very near future.

What’s the opportunity? Great yield, very low duration: an almost unprecedented situation in the ultra-short-end with a yield currently around 2.5% and very low duration (modified duration of only 0.34 for Evli Euro Liquidity).

First, nobody wanted cash. Then, everybody wanted cash. In March, this held true for bondholders and issuers alike. Both wanted to de-risk. Investors needed to sell assets and companies needed to issue credit. Only one market was truly available to both.

Short-dated became the sacrificial lamb. Amid the crisis, bondholders faced a conundrum: do I dare to ask traders for a price on the illiquid, longer-dated credit which have vague price indications far below par (100)? Or get some quick relief and a mental victory by selling a liquid bond that matures next year and has only dropped to 98? Many chose the latter.

Companies also seized the opportunity to raise cash. Almost any company that could issue commercial papers did so. In terms of the market’s supply/demand dynamics, it’s not optimal, but it helps the companies fundamentally. The benefit here is that, in spite of the unprecedented impact of Covid-19, the ability for most corporates to repay short-term debt has not changed dramatically.

Even as the recovery builds up steam, the buyers are not targeting the short end. Instead, the fast money investors (and the ECB) are focused on the long end and buying the dip on bonds that dropped many points and offer big total return potential from longer duration and spread compression.

In contrast, the typical buyers in the short end include buy-and-hold investors who, during the crisis, have been happy to sit on the sidelines. Since they are not considered fast money, meaning they don’t dip in and out of the markets, the return of their demand in the short end is only gradually coming back.

Oil price amplified the dislocation in the Nordic region

The supply/demand dislocation was even more pronounced in the Nordic region. Like the rest of the world, the Nordics were affected by Covid-19, but the oil price crash increased the severity of the sell-off and price correction, particularly in Norway. Liquidity in the region became uncharacteristically weak, especially due to big outflows in Norway and Sweden.

For Nordic and unrated bonds, there really isn’t much fast money involvement to buy the dips. That’s why they’ve been lagging the Euro IG market in the retracement since late March. Return chasers and fast money have been buying the HY and ECB eligible IG market. The buying momentum is slowly returning for Nordic and unrated bonds, but it’s from the region’s typical investors: long-term buy-and-hold investors who are just now gradually returning to the market, enticed by the still high spread and yield levels.

Fortunately, support is also on the way: all of the Nordic central banks or governments have said they will buy corporate bonds from the secondary and primary markets, as well as providing various direct programs to support local companies. On a positive side note, and lost among the Covid-19 headlines, is the fact that the Q1 results of many Nordic companies still managed to beat expectations.

Despite the massive price movements and the problems faced by gated funds in Sweden and Norway, Evli’s funds did not face any difficulties with liquidity and were open for trading every single banking day throughout this crisis.

With nobody rushing into the short-end yet, we’re witnessing rare inverted yield curves for credit issuers. How did this happen? An uneven recovery resulting from fast money investors being focused on the long-end and buying the dip on bonds that dropped many points and offering big total return potential from longer duration and spread compression.

So why are we highlighting the very short end? Because this is a once-in-a-decade opportunity in which short-dated bonds now offer similar high yields to the riskier, longer-dated peers. For example, the Evli Euro Liquidity fund offers a yield-to-maturity of almost 3% and modified duration of only 0.34.

In the cases with flat or inverted curves, you’re not really being rewarded for the extra duration risk of going long-dated. And compare this to just last year, when low-rated (high yield) corporates were issuing long and risky 10-year bonds at sub-3% levels. Now, investors can get the same yields or better, but from credits with higher ratings and much lower duration. And because they’ve been lagging the recovery somewhat, the Nordic and unrated bonds offer even better return potential.

There’s more downside protection in the short end, too: since corporate bonds have a maturity date, the bonds are highly likely to be pulled back to 100 (par) on the maturity date, which happens to be in the near future for the bonds in our low duration funds. Evli’s funds invest in fundamentally strong companies that have ample near-term liquidity sources and the ability to tap new liquidity sources.

As one moves further & longer in the credit curve, there is always an increasing uncertainty that bonds will be paid back at par. So, by getting involved in the short end now, you don’t have to wait 10 years to see if the company survives, riding the ups-and-downs of the economic cycle in the meanwhile, and praying that you get your 100 back some day in 2030 or so.

Evli offers three funds that take advantage of this opportunity in the very short end of the crossover bond and commercial paper markets. These are the Evli Euro Liquidity, Evli Nordic Corporate Bond and Evli Short Corporate Bond funds. 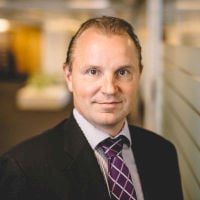 Senior Portfolio Manager, MSc (Econ), in the industry since 1994.