Time for the bears to take to the woods?

This year’s central bank rate hike race has sent returns on bonds and equity worldwide into the basement, in an unparalleled bear bonanza not seen since the bleak 1970s. When can investors return to “normal” and resume feasting on the “free” lunch of proven portfolio mix models? “Pivot” and “inflection" are key clues, experts say.

Is 2022 another Annus Horribilis, to quote the late Queen Elizabeth II in 1992? It’s been a year marked by geopolitical anxiety, energy crises, climate worries and the return of the inflation ghost. At Evli, Chief Strategist Valtteri Ahti summarizes the reaction of spooked investors worldwide: “Who ate my free lunch?”

The free lunch, in this case, is the tried-and-tested formula for asset allocation, where 60 percent of a portfolio consists of equity and 40 percent of bonds. This lifebuoy rescued no one this year. “Regardless of action, you fared poorly,” states Ahti and continues: “2022 is one those rare years when the old economic theory that the only free lunch served is through diversification failed a vanilla 60/40 portfolio of equities and bonds."

The zookeepers who unleashed the bears in the first place are the central bank governors of the world, whose fear of inflation proved much deeper than most had reckoned with. “Interest rates are still not that high from a historical perspective. It’s the rate of increase that is quite astounding and this has sent markets into the basement. It all makes for a highly unusual year,” says Ahti.

It is unusual in the sense that all markets have been a derivative of the fixed income market. And equities in sectors relying on future growth opportunities – such as tech stocks – have fared relatively worse than so-called value stocks in companies with solid revenue streams.

Race towards the bottom

Data on stocks and bond returns for 2022 illustrate the joint race towards the bottom. By the end of October, at their nadir global stocks had fallen by over 20 percent and European sovereign bonds by almost twenty percent. The yield spread between different bond durations, meanwhile, has been squeezed to nearly zilch, as the spread between German 2-year and 10-year yields show.

“This year is an outlier in modern history, well worth remembering, painful as it has been,” notes Ahti and points to another oddity.

“The 1970s was characterized by the combination of inflation fears and drawn-out recession, or stagnation, which combined as ‘stagflation’. This time around, however, the recession picture isn’t quite borne out by data and macro, even if many feels as if the present is eerily reminiscent of the 1970s.”

Labor markets, for example, have proven remarkably resilient and GDP growth figures remain relatively – but surprisingly – strong, given the toxic backdrop of war, and soaring energy costs and freight rates.

The 1970’s aside, investors search for clues by looking at more recent downturns triggered by the financial crisis of 2008/09 and the Covid pandemic. “Unlike the financial and pandemic crises, the current slump is mostly a result of a double whammy of monetary tightening on an unprecedented scale and the energy cost explosion", explains Ahti.

Why, then, do central bank governors team up in a joint kamikaze pilot seat? "Because central bankers rightly think that ensuring price stability in the long run is worth enduring a recession."

When will the pain end?

So, the trillion-dollar question is, when does the pain end? Ahti offers two possible scenarios. The first is called “the brute force solution”, which is based on what’s already priced in with the current situation, or when a certain drawdown in the S&P 500 index is accompanied by outright recession, and when it’s not. "Looking at data since 1956, bear markets that are not followed by economic recessions on average involve a fall of 23.2 percent."

So, what does it look like? By the end of October, S&P was down 18.6 percent, but that has improved since then in the wake of lower-than-expected US inflation numbers early November promised to shoo the bears back into the woods. More on that shortly.

Even if the likelihood of recession has lessened, it needn’t be the end of the world if and when it comes, says Ahti and explains why.

"If we go into recession, it’s likely to be far milder than in the financial crisis or the IT bubble. Companies and households have robust balance sheets and the job market is very strong. These factors should cushion the economy.”

Companies well prepared for a downturn

Mikael Lundström, CIO at Evli Fund Management, agrees with Ahti that 2022 has been a difficult year so far and that the present slump is not like previous downturns. “All euro fixed income markets have had an extremely difficult year with a total return of between minus 11 percent and minus 15 percent.”

But, things are brightening up. “The flip side of that is that the present yields are the highest they have been in over 10 years.”

In the corporate bond market, surprisingly resilient corporate earnings offer additional sunshine on a rainy fall day. “Results so far have been better than feared, the leverage is stable and the reopening of the High Yield market significantly reduces refinancing risks. Market is pricing in a severe crisis in corporate Europe for next year and investor should remember that credit market turns positive before corporate results."

Adding to the cautiously positive sentiment is the fact that we are nearing the year-end, traditionally a good period for fixed income investments. On the other hand, the European Central Bank (ECB) has yet to come up with a clue as to when their eagerness to hike rates might reach a pivot. “The danger is that ECB fails to take sufficient clues from the inflation data in time to prevent a deeper recession.”

Some European markets are already technically in recession, while Nordic equity markets and GDP growth have fared slightly better, partly because the energy price shock has been less severe than on the European continent, says Lundström and returns to the key role of the ECB: “The risk lies in whether they choose to remain extremely aggressive even when it’s no longer called for, since there is a lag before the positive effects of a rate ease set in. Our prediction is for the ECB and non-eurozone central banks to hike rates in line with what’s currently priced in until the year ends, and then be more cautious.”

Concluding with a look at the 60/40 portfolio model, Lundström states: “We expect better returns for equity, but the risk-adjusted returns still look better for bonds.” 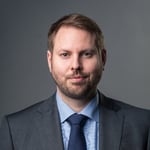 Valtteri Ahti, Ph.D. is the chief strategist of Evli. Previously he has worked as the head of macro, rates and currencies research and as chief economist. Valtteri studied economics at Cambridge, Yale and the University of Helsinki. 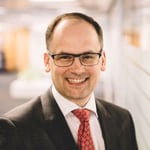 Mikael Lundström, MSc (Econ), Chief Investment Officer at Evli. Mikael has invested in the European High Yield market since it’s birth in 1999 and has been the portfolio manager of Evli Corporate Bond fund that was launched the same year and Evli European High Yield fund since launch. He holds a Morningstar Analyst Rating for his funds.

Back
Newsletter
Stay up to date Subscribe to our newsletter