Forecasting is usually an exercise in eating humble pie. Before moving on to the macro and market outlook for 2022 it’s worth thinking about why most forecasts fail. The reason is simple. The more complex a system is, the more likely it will be hit by a meaningful shock. Given enough time any system will be hit and diverge from its base trajectory. For a system as complex as the global market economy a year is more than sufficient time to succumb to multiple shocks.

Allocation for the end of the year and for 2022

Despite widespread fears of a 20 percent correction the year 2021 looks set to be a stellar year for equities. Corrections have proved to be buy-the-dip opportunities, which has been a great recipe for the post GFC-era. The Corona dip may have been the one dip to rule them all. 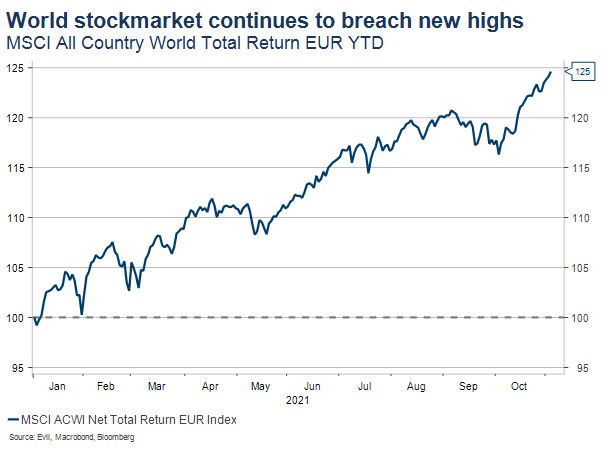 In terms of asset allocation, we recommend overweighting equities. The year 2022 is likely to be a positive year for equities albeit with more volatility than in 2021. The upside in equities is more contained than in 2021, because we will see tightening economic policy, a slowdown in economic growth albeit from high levels, significantly lower earnings growth, high margins, rising interest rates and high valuation multiples.

More volatility seems a given the recent rise in yields and inflationary uncertainty ahead. Emerging market equities contain the most upside risk given low valuations and the potential for China to both stimulate and to end its regime switching regulatory overhaul.

In 2022 government bond yields will likely continue to rise and government bond returns will be negative, except for brief spikes during risk-off periods. We recommend staying underweight in government bonds and investment grade credit bonds.

Economic growth will moderate for a number of reasons. Monetary policy will continue to tighten in 2022. The Fed tapers its QE programme and markets expect at least two rate hikes next year. Even the ECB is expected to hike after a year and half or so. Fiscal policy is set to reverse from historically expansionary levels.

In addition excess savings of some 5 billion USD will be partially spent and the remainder of the pent-up demand unleashed. Hence a number of one-offs will lift economic growth in the first half of next year, but then dissipate. Global economic growth will move from 6 % to closer to 3-4 percent by the end of the year.

The inflationary pressure will subside by the end of next year

According to this base scenario by the end of 2022 inflation will settle into a rate of roughly 2.5-3.0 % versus a rate of 2 % seen pre-corona. Central banks have explicitly stated that they want inflation to be higher than pre-corona.

The base case entails demand for goods falling as economic growth begins to fall as described above. Supply will expand as the logistical nightmare is untangled. Container ships become available and chip production is ramped up in the first half of next year.

The risk and threat to higher inflation comes from wage inflation taking off, of which there is already evidence in the US. As wage inflation takes off, inflationary expectations rise markedly and inflation becomes entrenched, settling in above 3 percent. Central bank policy aimed at lowering inflation expectations is a costly exercise in terms of economic growth and markets. In other words, the key risk for 2022 is that transitory morphs into persistency.

The Norwegian economy is further supported by rising oil prices and is set to hike rates again in December. The Riksbank is far more conservative and has been adamant that the inflationary surge is transitory. The Danish economy has been exhibiting some of the fastest growth rates in the Nordics whilst Finland has been the slowest. Housing prices are moderating in all four economies after a stellar rise. All Nordic economies purport high vaccination rates allowing them to better weather a potential rise in Corona or a new mutation.

The information presented above is not an investment recommendation, and individual positive or negative information relating to a particular issuer, security, financial instrument, or other investment should not be construed as a direct or intermediate investment recommendation. Investors make all of their investment decisions independently and on their own responsibility. Investment decisions are based on the investors’ own research and assessments of companies, securities, financial instruments, or other investment instruments, and of the risks associated with the investment decision. Before making an investment decision, investors must familiarize themselves with any prospectuses and regulations and restrictions concerning relevant investment instruments. Past performance is not a guarantee of future returns. The value of an investment may increase or decrease, and investors may lose assets invested in an investment instrument. Evli Bank Plc is the place of subscription for structured investment products it issues and arranges. Evli Fund Management Company Ltd manages Evli’s mutual funds. Fund unit subscription and redemption orders are received by Evli Bank Plc. The disclosure of the above information and documents may be restricted by the laws and official regulations of several countries, and therefore the persons familiarizing themselves with the above information and documents are themselves responsible for determining and complying with the content of any laws or official regulations applicable to such persons. The above information and/or documents do not constitute an offer to sell or subscribe an investment product in countries where making an offer would violate the law or official regulations.
This disclaimer is in Finnish and English. If there are any discrepancies, differences or ambiguities in the language versions, the Finnish version shall prevail.

Valtteri Ahti, Ph.D. is the Chief Strategist at Evli. He has studied at the universities of Cambridge, Yale and Helsinki.