A gem against the crowd

Going against the crowd in 2016-2020, when certain hot themes drove the market, caused a bumpy ride for Evli GEM fund. Then something changed. The Fund suddenly started to outperform and still looks attractive on valuation multiples.

Investing in unloved value stocks and having no exposure to popular Chinese investment themes of the 2016-2020 years made for an interesting ride. Critical of variable-interest entities such as Alibaba, assessing Chinese property developers as too leveraged and some ‘growth’ and ‘green’ stocks as overpriced, the Evli GEM fund truly went against the crowd.

At its six-year anniversary in January 2021 the fund lagged its benchmark, the MSCI Emerging Markets Net Return Index, by almost a cumulative 29 percentage points. Then something changed. Many hot themes that the fund had avoided started to unravel, and the fund outperformed so greatly during the rest of the year, that it suddenly was cumulatively slightly ahead of the benchmark since launch.

With a trailing free cash flow multiple of 8.3x and a forward price earnings ratio of 9.4x, the portfolio continues to present itself attractively. Its return potential in a normalish market environment, not to mention if the market becomes friendly toward value stocks again, is big.

Annual growth projections of this magnitude are outside the scope of the fund’s value-oriented risk management approach, but let’s play around with the idea that portfolio companies have reached their terminal state and grow free cash flows at a long-term rate of 3 percent annually. In a perpetuity formula, that 3 simply adds to the original 12 for an expected 15 percent annual rate of return.

An added advantage could come from multiple expansion. Simplifying, the fund buys stocks with depressed valuation multiples and sells when multiples have expanded. If the long-term buy-and-hold math expectation is 15 percent annualized, there could exist additional beef in reacting to medium-term price fluctuations. There wasn’t much multiple expansion within emerging markets value during the decade to 2020, as market participants bid up so called ‘growth’ stocks instead. Sentiment seems to have changed, however, so let’s assume the portfolio’s free cash flow multiple increases from 8.3x to 10x over the next few years, back to levels seen when we started in 2016. That’s a 20 percent adjustment and would by itself add a couple of percentage points to annualized returns, which thereby would start to close in on the magic number of twenty.

Mathematics and markets could disagree, returns are volatile, reality is complex, and no promises have been made, but this simple calculation nonetheless serves as one indication of great return potential in our emerging markets strategy. Could be one heck of a roaring twenties coming up for this gem. 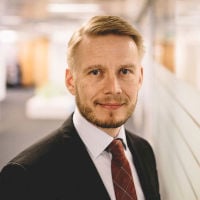 Head of global equities, M.Soc.Sc.(Econ.). Hans-Kristian has been working in the finance sector since 1998. Prior to Evli, he worked as Managing Director, Research Director and Portfolio Manager at Carnegie Asset Management.