It’s that time of the year that central bankers make their annual pilgrimage to Jackson Hole to discuss the economic state of the world.

Jackson Hole is about pondering the big picture

Markets are myopic as usual. The focus is on hints as to when and how central banks unwind their QE programs. Mario Draghi’s speech will be perused for hints concerning the ECB’s September meeting and its announcement of a QE taper.

In 2014 and 2015 the topics were the labour market and inflation respectively. Unemployment rates flirt with historical lows in the US, UK and Germany, but price pressures remain non-existent. The relationship between unemployment and inflation known as the Phillips curve has historically been unstable, but now it just seems dead. We are potentially trudging along the most nonlinear Phillips curve in history.

This year’s topic is ”Fostering a Dynamic Global Economy.” Figure 1 depicts the average annual GDP growth rate of every US economic expansion since the Second World War. Clearly there is a definite lack of dynamism in the economy. The economic expansion that began in 2009 is the slowest post WW2 expansion to date.

The secular fall in economic growth rates is not specific to the US. Rather it is a near universal phenomenon in rich economies. The primary reason is ageing demographics. The fall in population growth rates results in falling labour force growth rates, which in turn reduces economic growth rates. Demographics also takes an indirect toll on growth. Statistically older workers are less productive than younger workers. In addition an ageing population implies a heavier burden on the working age population as the relative number of pensioners rises.

The third secular factor is globalization. We may have reaped the bulk of the benefits stemming from globalization to a large extent. The entry of China and the former Soviet republics into the global marketplace gave a huge boost to global value chains and kept inflation at bay. Perhaps other developing economies such as India might not serve a similar role in the future.

The Effects of Monetary Policy in the Long Run

In the best case monetary policy moderates economic fluctuations and doesn’t hurt long run economic growth. Central banks have managed to do so in the Jackson Hole era. One shouldn’t ask for more. Monetary policy is not a panacea for structural issues as a scholar of economics, such as Janet Yellen, might tell you. 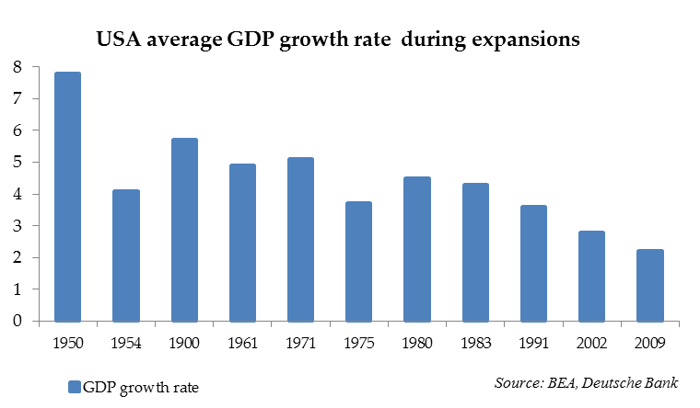 Valtteri Ahti, Ph.D. is the Chief Economist at Evli. He has studied at the universities of Cambridge, Yale and Helsinki.

Stay up to date