When the US stock market’s return base does broaden and FAANGs no longer drive the returns as strongly as they have, there’s a good chance that well-diversified factor investors will be among the ones reaping the benefits.

It’s no news that the performance of tech stocks has been one of the major drivers behind strong US equity returns in the last couple of years. During the last 18 months from September 2016, the Information Technology sector in the MSCI USA index has gained over 55%. Strong returns combined with the sector’s average weight of just under 23%, means that IT companies have accounted for around 12 percentage points (or 40%) of the 30% total returns of the MSCI USA index.

The 5 FAANG stocks combined have contributed 19% of the 632 stock index’s returns. 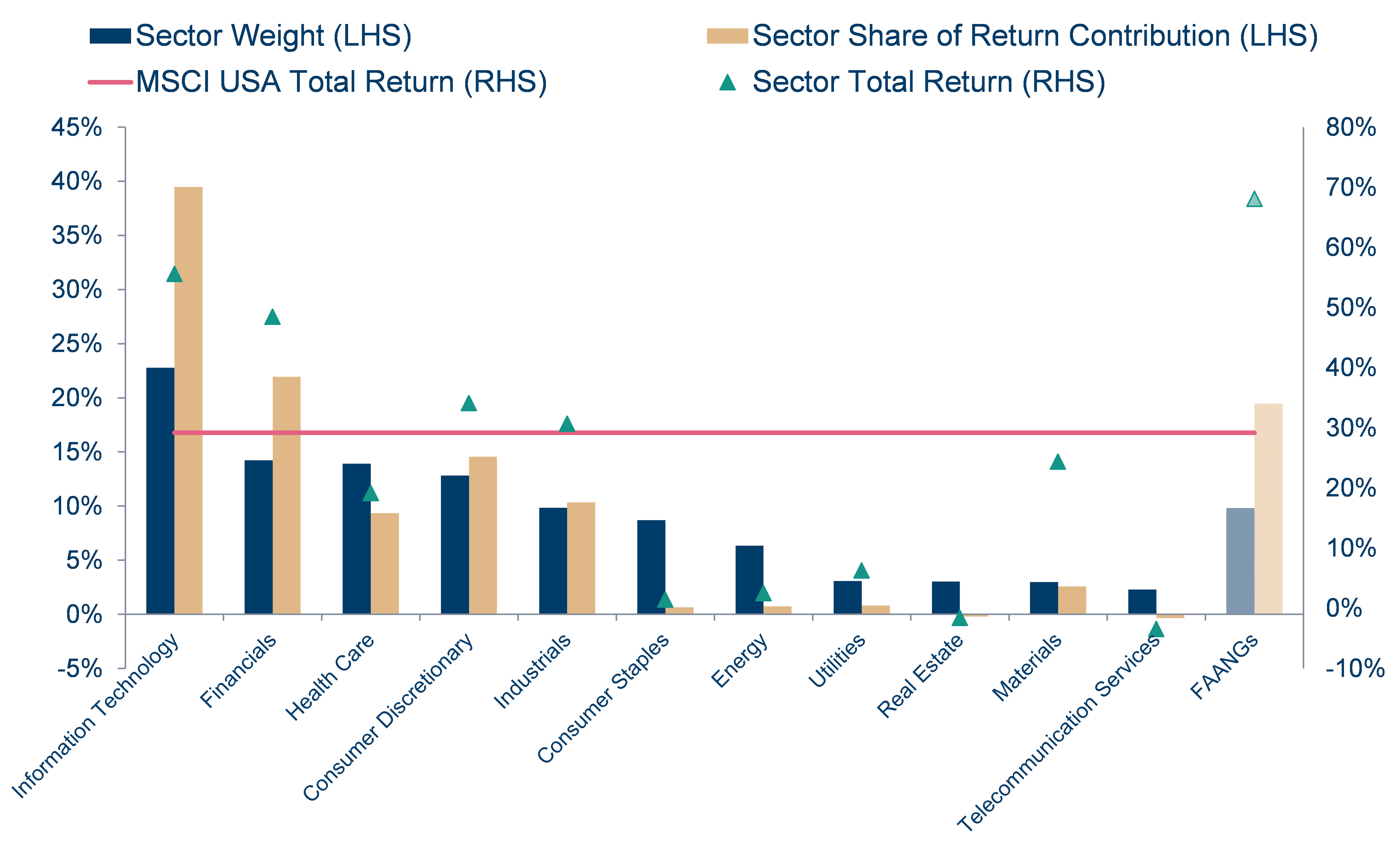 From the viewpoint of a well-diversified factor investor periods of extreme market concentration have traditionally been difficult.

During the Dot-com bubble in 1996 to 1999 Scientific Beta’s US factor index (similar to the index* Evli Equity Factor USA follows) lost out an average of 9.6 percentage points in yearly returns to MSCI USA (for cumulative returns of 93% and 166% correspondingly).

While it hardly can be argued that the last few years would have been anywhere near as extreme as the Dot-com bubble was, the current FAANG-led market has not been beneficial for US factor investors. The Evli Equity Factor USA Fund, launched 18 months ago on Aug 4th 2016, lagged its benchmark index, MSCI USA, by 1.16 percentage points gross of fees on March 19th 2018.

Evli’s factor funds suffer by design from concentrated markets dominated by a few big stocks. The funds’ diversification scheme ensures that the largest companies never get as high weights in the portfolio as they do in the market-cap weighted index. This means the fund most likely loses against the market-cap weighted index, if market returns are overly driven by the largest companies.

A shift in market dynamics could be an opportunity

When the Dot-com bubble burst in the early 2000s, Scientific Beta’s factor index reversed its earlier losses suffered in the 90s and beat the MSCI USA index by an average of 14 percentage points from 2000 to 2004 (for cumulative returns of 72% vs -15%).

Recently Evli’s Equity Factor USA fund has experienced some of its better days relatively against the benchmark, as Facebook’s shares have plummeted amidst the Cambridge Analytica crisis. Whether this is an early sign of a broader shift in market dynamics remains to be seen. When the US stock market’s return base does broaden and FAANGs no longer drive the returns as strongly as they have, there’s a good chance Evli Equity Factor USA will be among the ones reaping the benefits.

Update: Since this piece was originally written FAANGs have continued to underperform. Most notably Amazon’s shares have fallen steeply following President Trump’s critique. As anticipated, this has been a boost to Evli Equity Factor USA’s relative performance against MSCI USA, as it has outperformed by around 0.7 percentage points between 20th and 29th of March 2018. Over 0.3 percentage points of this can be attributed to the fund’s underweight in FAANG stocks.