After finishing our meeting with the chairman of an €80m real estate company which had raised equity three times in the past four years and lost 60% of its value in the past two years, “the closer” was brought in, a high-pressure executive who probably just returned from her first Tony Robbins seminar.

“What type of investments do you like to do? Convertibles? PIPEs? Mortgage-backed securities? Junior subordinated unsecureds? Soft loans? CDOs? CLOs? CBOs?” “We just invest in listed equities,” we explained.

“What is the normal deal size you do?” she asked. “We don't do deals,” we told her, “we buy shares from the secondary market through the stock exchange, you know, from other investors.”

“Yeah, I know, but if we can come together, how long is your process? How long 'til we can close the deal?” she asked. “We don’t do deals,” we repeated and explained that our timing depends on the volume of the company’s shares trading in the market.

“Don’t worry, we have some shares we can sell you. And we can do it very quickly. So, between you and us, do we have a deal?”

After resisting again, an offer for a guaranteed 20% annual return was put on the table. We were surprised the number wasn’t written on a napkin and slid across.

​We’ve promised our investors that we will never invest in any company unless we have sat down face-to-face with management. Traveling across emerging markets, we occasionally see companies which raise equity almost every year, make unsubstantiated return promises, and desperately go out of their way to appeal to investors. One Vietnamese company, for example, drove for four hours just to meet with us, another served us a nice lunch and offered alcohol which we politely declined, and a third tried to lure us with resort tickets – all to get cash for struggling business (or for personal use). However, we don’t take the bait. Instead, we love to find companies which are focused on growing the business instead of spending their time trying to put lipstick on a pig.

To get a hold of the management of one small industrial holding we found of great interest, we had to stalk them on social media, use our local network, make multiple phone calls, and engage interpreters. Our attempts landed us a meeting with the company's CFO at a factory located a couple of hours from Ho Chi Minh City. Later in our trip, we also flew to a distant province and drove to a remote village to visit one of the company’s quarries and other busy factories. Instead of a “deal”, this firm offered us a committed management team, growing production capacity, and expanding earnings boosted by an increase in exports and new manufacturing facilities coming on-line. As a result, we invested in this obscure company trading at only 7x P/E. 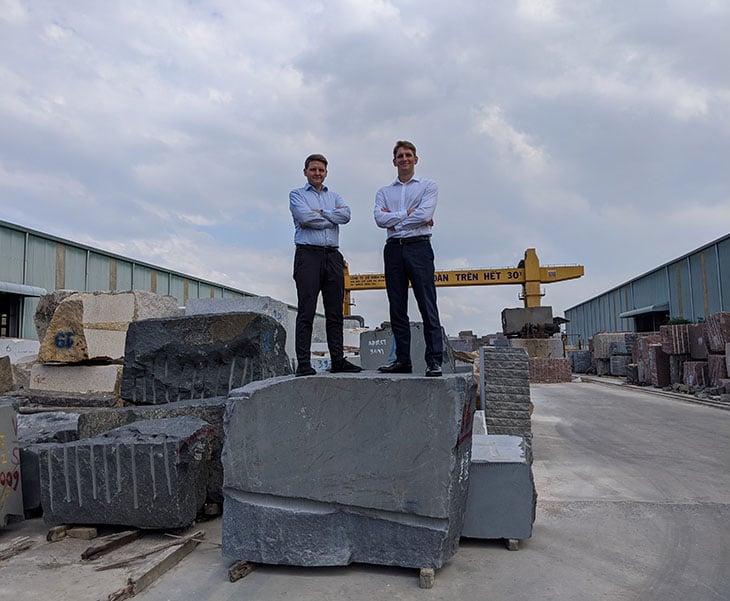 We spent an entire month in Vietnam between Ho Chi Minh City and Hanoi, meeting with the CEOs and other senior management of 50 public companies. Additionally, we met with the stock exchange and the securities regulator to learn more about the Vietnamese market and discuss ESG developments, attended two ESG events of the local CFA society, and networked with investment professionals at the CFA award ceremony for newly minted charterholders.

To better understand potential macro risks, we also visited the finance ministry and had lunch with senior central bank executives. Upon arriving at a hotel in downtown Hanoi for the lunch meeting with the central bank (whom, according to our broker, we had to entice with a fancy restaurant to improve our chances of getting the meeting), we were greeted by hotel employees who asked if we were here with “the Finnish party.” Since we represent one of the largest asset management firms in Finland and often introduce ourselves as “Finnish investors,” we followed them to a room where we were surprised to be greeted by the Finnish ambassador, fellow Finnish investors, and other expats. It turned out this was a Finnish Independence Day reception hosted by the Finnish embassy, sponsored by a friendly competitor, and attended by some of our fund’s investors. We appreciated this coincidence.

​An intriguing fact we learned in our meeting with the Ho Chi Minh City Stock Exchange was that after George Bush visited the exchange in 2006, the Vietnamese stock market skyrocketed. Let's see if our visit has a similar effect. 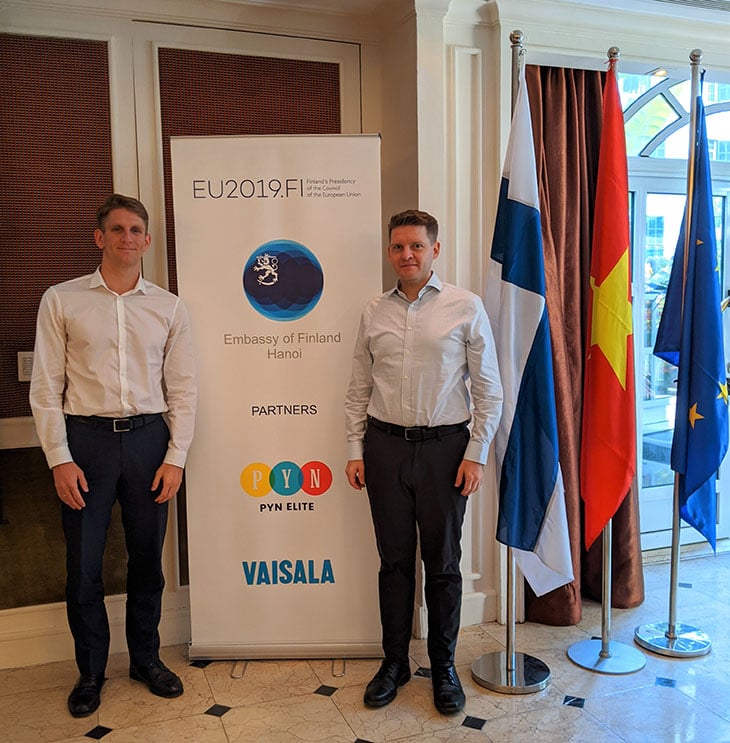 Getting our hands dirty

​Industrial production in Vietnam is growing as many Chinese factories relocate to Vietnam due to its much lower cost of labor, and as the U.S.-China trade war makes Vietnamese products more attractive for American companies. We witnessed this strong demand during our many factory visits.

A rubber company turned real estate developer showed us a large industrial park they are building to host multiple Chinese manufacturers. On a due diligence tour of a construction materials factory, we saw manufacturing of products that are now in high demand not only in Vietnam but also in China, Japan, and Korea. At a busy logistics park of an air cargo company, we observed first-hand how the expanding international trade volume is handled. At a pipe manufacturer, we found recently installed machines from Italy and Taiwan fulfilling the growing number of local and foreign orders. A dairy company impressed us with their plant running at near full capacity and almost entirely automated by Swedish and German robots. In addition to industrial facilities, we also witnessed a human capital “factory” – the newly built training campus of a quickly growing software company. 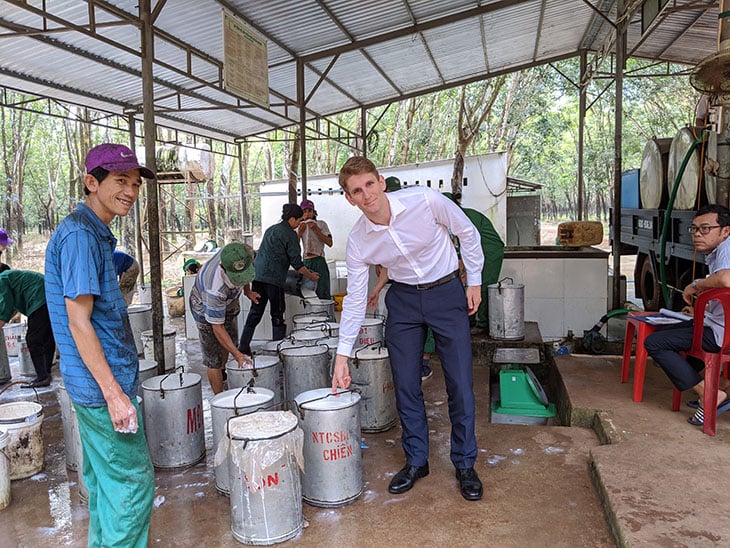 Sleeping on the job

​A curious habit we observed multiple times was the Vietnamese people’s affection for taking extended naps in the office every day after lunch. We were confused as to why no companies ever wanted to accept our proposed 11am and 1pm meeting times, but it started to make sense when we showed up for meetings to unlit offices and a receptionist would crawl out from underneath a desk to escort us to a dark board room where upon turning on the lights dozens of sleepy office workers would be awoken and scurry away.​

While many people we asked were able to help us better understand this cultural norm, nobody we met actually admitted to doing it themselves. We wonder if these daily naps might be one of the reasons the country’s labor productivity is among the lowest in the world. On the other hand, perhaps it would be even lower without the extra shut-eye: recent research shows that more sleep can actually boost productivity.

​In emerging markets, it’s sadly common practice for employees of brokerage firms to profit off of a client’s confidential trading information by buying stocks, either in their own accounts or in friends’ and family’s, before the client’s order is completed. So-called frontrunning can drive up stock prices before a large order is completed and therefore reduce clients’ returns. One time, a CEO asked us why we were selling his company’s stock which in fact we were not. It turned out to be another fund of our firm. However, we weren’t even able to verify it until the fund’s holdings were reported months later: ironically, our firm’s traders won’t discuss other funds’ trades internally – meanwhile, the whole Indonesian market knew.

We have a zero tolerance policy when it comes to information leakage. If we discover that a broker has engaged in such unethical behavior, we stop doing business with them. When we visited each of the top three institutional brokers in Vietnam and delicately asked about information leakage, each one assured us that such behavior never occurs at their firm. However, each one said that they know for a fact that their two competitors do leak. By speaking with former employees of the three firms, we were able to objectively learn which broker has had the fewest problems.

In our discussions with market participants, we also learned that the biggest problem lies not with the brokers, but with the securities depository which records the trade data. Apparently, government employees “trade” trading information on the side to supplement their low incomes. We addressed this unacceptable practice in our meeting with the State Securities Commission, Vietnam’s securities regulator. However, they could not provide a meaningful response. Neither could they address our questions about regulatory ESG developments: while they readily referred us to particular articles or clauses in their securities laws (e.g. Article 97, Paragraph 42Y), they struggled to comment on the most basic ESG matters.

This was déjà vu of our meeting with the same regulator two years earlier on the same topics. Their inability to provide relevant information is either incompetence or fear to respond on behalf of their communist government. Given that we can’t always rely on regulators to improve ESG standards, we engage with companies on ESG issues ourselves.

Meeting with the State Securities Commission

​The government bureaucracy of a communist state is often a path to institutionalized corruption and an obstacle to doing business. However, during our month in Vietnam we also observed the good sides of a socialist state organization.

One day we noticed from our office window a massive fire break out in a building nearby. We rushed to the scene. Once there, we found several fire brigades already at work liquidating the fire. It took them only a few minutes to finish the operation and prevent a conflagration. This quick and unified response to an emergency was symbolic of a streamlined one-party state’s ability to react swiftly to pressing problems. We liken it to the Chinese authorities' intensive management of the ongoing coronavirus crisis and concur with the famed emerging markets investor Mark Mobius who put it well: "with a command economy, they can really put resources behind the cure and the solution.” 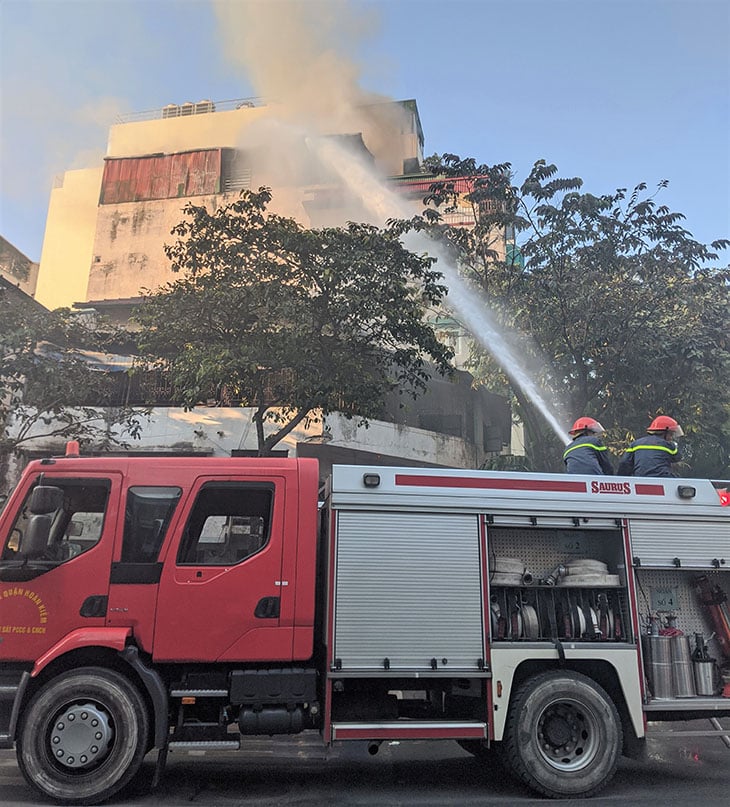 An efficient fire brigade in action in Hanoi, using one of over 100 fire trucks Vietnam purchased from Finland

​Having spent a month in each – the Philippines, Malaysia, Indonesia, Bangladesh, Pakistan, Thailand and Vietnam – we are departing to the eighth country in our effort to live in 12 emerging markets in 12 months. Stay tuned for... Saudi Arabia.

A month in Thailand

A month in the Philippines

A month in Malaysia

A month in Indonesia

A month in Bangladesh

A month in Pakistan

Why crossover is ideal for returns in this low-yield era