A month in Turkey: Retreating from coronavirus

It took one of us 33 hours on four flights through five empty airports, and the other 38 hours on consulate-arranged transportation and a ferry plus two weeks in state-imposed quarantine at a Soviet-style 1-star hotel, to bring our families back to our countries of citizenship since nearly all international flights had been cancelled and our country of residence wouldn’t accept us.

We were trying to abort the sinking ship: when we arrived in Turkey, the country’s official statistic of registered coronavirus cases stood at zero – and the government took a lot of pride in the number given that other large countries already had thousands infected – however, a month later Turkey had over 100,000 reported cases, more than all but the U.S., Spain, Italy, France, Germany, and the U.K.

Our biggest concern was not the reported number of cases though – it was the unreported cases. While the media in Turkey is now almost entirely state-controlled and has painted a calming picture of a country skillfully keeping the virus at bay, the excess deaths are at least more than twice the number of official deaths. For ten days in a row in April, the ratio of official coronavirus-related deaths to the number of cases stood exactly at 2.1%; when this was pointed out by the public, the ratio shifted overnight. Healthcare professionals that made coronavirus statements contradicting the state’s official position had to publicly apologize. While a third of Turkey’s prisoners were freed in fear of coronavirus contagion and riots, the political dissidents and journalists were kept behind bars, helping the country maintain its record for the number of journalists in jail. Over 400 people were detained because they posted independent, government-unapproved coronavirus information on social media. We hope this write-up doesn’t lead to the same outcome on our next visit to the country.

Instead of a lockdown like most countries had done, Turkey only required the non-working age population to stay home, and nearly a month into the pandemic started shutting down the country on weekends. This was decided and announced for the first time only two hours before midnight on Friday, triggering chaos on the streets with crowds of people mingling in massive lines for groceries and clashing with the police and each other. The president – in whose sole power lies the decision to declare lockdowns – said “production must continue and the cogs must keep turning under every circumstance and every condition” in spite of the mayor of Istanbul and others in the opposition party calling for a complete lockdown.

The crisis mismanagement will only lead to a weaker economy and increased political turbulence. In fact, markets are already pricing this in as the currency devalued nearly 15% so far despite the government's attempts to prop it up by burning through reserves at an alarming rate. But Turkey is used to chronic currency instability: holding the record for the most currency crises, it has seen its currency devalue by over 50% in a twelve-month period four times in the past 30 years (and declining over 20% no less than 12 times) with the most recent 50% decline occurring only two years ago. 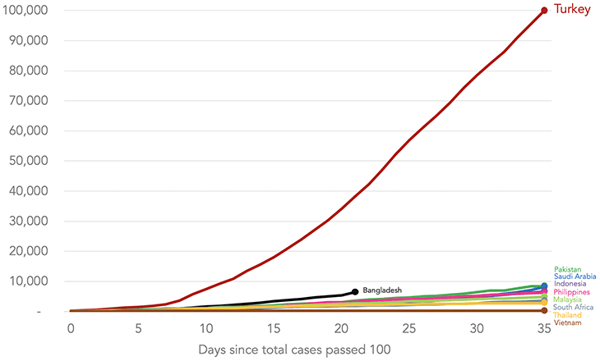 Where you can still find toilet paper

One company we met, a discount grocery store operator that runs nearly 8,000 small supermarkets, is positioned defensively to withstand the pandemic impact relatively unscathed. On the day the first coronavirus case was formally announced in Turkey, some of their stores had seen as much as 7x increase in sales. Their hard-discount business model of carrying a limited number of items at the lowest prices possible in neighborhood locations reachable by foot guarantees consistent consumer traffic, as people still need staples such as water, grains, produce, and toilet paper but don’t want to travel to crowded hypermarkets during the pandemic.

The company, which boasts a 30% return on equity, has the lowest SG&A expense ratio in the industry (12% vs competitors’ 18%) and an efficient logistics network ensuring sufficient store supplies. When we visited their distribution center we were impressed by the efficient inventory management system which even in light of the crisis pushed through and restocked large amounts of toilet paper and other necessities, without running out.

In addition, the company will soon publish its first sustainability report and the management was willing to engage with us to improve their ESG practices. We are preparing an evidence-based set of ESG recommendations for the company to benefit both shareholders and other stakeholders. 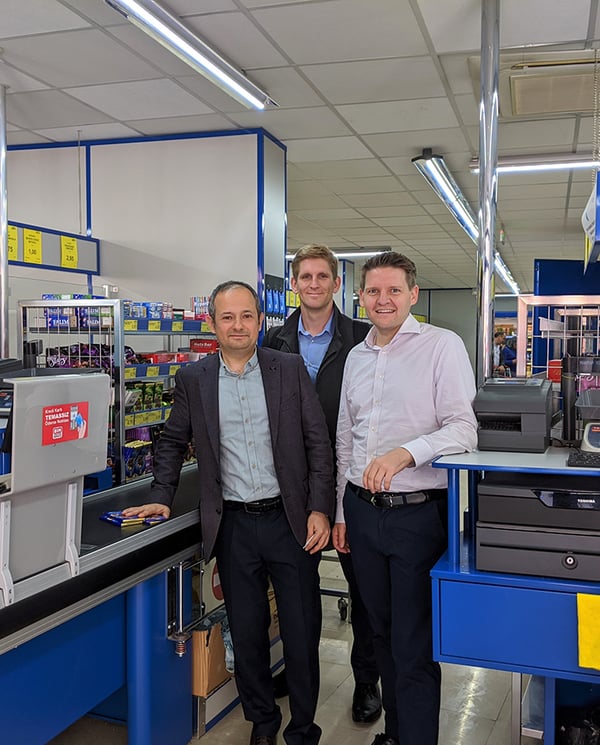 Ivan Nechunaev and Burton Flynn on a due diligence tour of one of the €5b discount grocery supermarket chain’s 8,000 stores with a corporate finance director

We spent an entire month in Turkey, meeting with 35 listed companies in Istanbul. We were on track to meet over 100 in Istanbul, Ankara, and Izmir; however, as the first coronavirus case was announced at the end of our first week in the country, the vast majority of our remaining meetings were canceled.

Among the few that didn’t cancel, we observed very different approaches to navigating the pandemic. One bank seemed completely unfazed and we noted a full house of office employees using company laptops who could have easily been working from home. Their CFO – who was eager to shake hands – was upset that we arrived wearing face masks since only employees with coronavirus symptoms are supposed to wear masks per the company’s internal rules.

An insurance company, on the other hand, agreed to meet with us but upon arrival required that we wash our hands and have our temperatures taken at reception. We were led through an empty office to a disinfected conference room where we were seated ten feet apart, and each meeting attendee was provided a set of face masks, gloves, and a small bottle of sanitizer. The company’s significant investments in IT have enabled nearly all employees to efficiently work from home.

We ended up spending most of the month self-isolating in our Airbnb apartments which featured views of the beautiful Bosphorus, analyzing the best ways to adjust our portfolio to protect it against risks and take advantage of severe price dislocations we observed in a few of the 632 companies we have met over the past year. 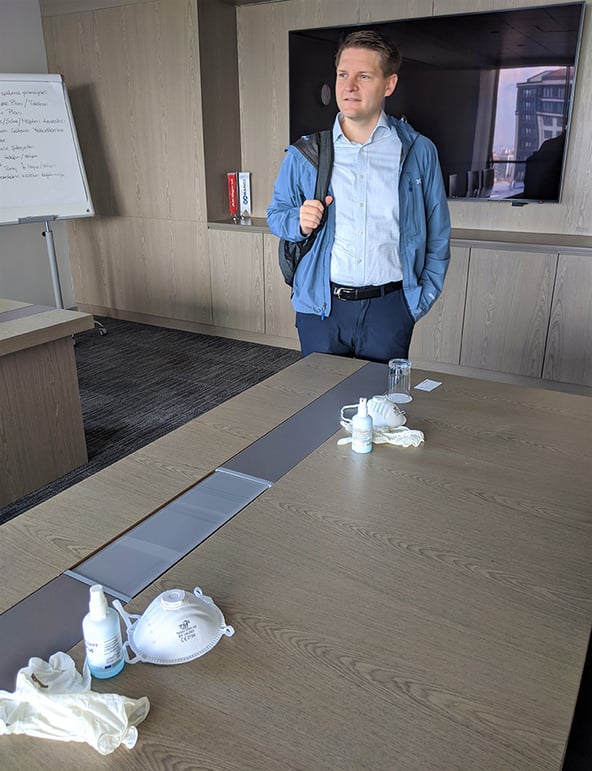 Airlines’ future up in the air with flights grounded

Among the companies we did meet, several had severe disruptions to their operations. The chairman of a global cruise port operator greeted us with a question: “Are you shareholders in our company?” When we responded that we weren’t, he exclaimed: “Great!” His stock price has declined nearly 80% this year as he has zero business since none of the cruise ships are operating.

A North Cyprus resort operator won’t see any guests for a while, and two airlines are grounded with no idea when flights will resume. Whereas the state-owned airline will receive a much-needed state bank loan to survive, its private low-cost competitor whose debt-to-EBITDA stands at 3x risks going bankrupt.

The founding chairman of a 50-year old leather company which sells to Italy said that in his entire time at the company he had never seen such a dramatic crisis. 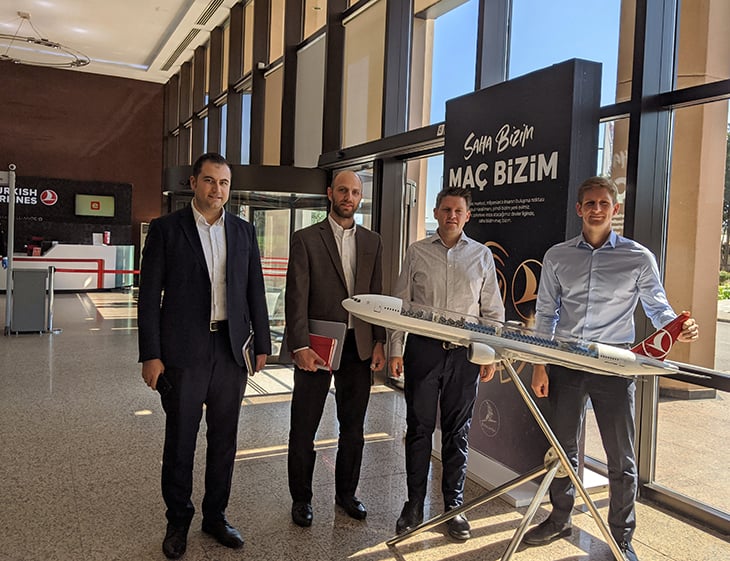 Having spent a month in each – the Philippines, Malaysia, Indonesia, Bangladesh, Pakistan, Thailand, Vietnam, Saudi Arabia, South Africa, and Turkey – we had planned to continue our journey of living in 12 markets in 12 months. However, we now have no visibility as to when or whether we will be able to complete our project. For now, we are spending our time analyzing the data we have collected during the project, considering new potential investments, and engaging with our portfolio companies remotely.

A month in Bangladesh: We're investing billions in the world’s best stock market

A month in Indonesia: Offending Trump in Bali

A month in Malaysia: Finding another gem on "Treasure Island"

A month in the Philippines: How active management helped us beat the traffic (and the market)